I read today that Devo guitarist Bob Casale passed away at the way-too-young age of 61.  This got me thinking about Devo, who I rarely listen to these days, and that is gonna change real quick like. Devo was practically a poster child for 80's music.  They were way before their time in some ways, although not in their sound.  I was in awe of Devo back in the day.  They were new wave/punk rock weirdos with a sense of humor to boot.  After reading about Bob Casale today I quickly took to ye ole YouTube for a while at work, and it reminded me why I loved them so much.

As I perused YouTube, I realized I had forgotten just how many awesome songs they had.  But I'd have to say that Peek-A-Boo is my favorite.  It's a great song that brings back some great memories of my punk rock days, and the video is spectacular.  Take a lookie below.

Posted by KickinAssTakingNames at 9:47 PM No comments: Links to this post

I got to relive my youth again recently when the Pixies rolled through town.  Fuckin' Pixies!!  I was first introduced to the Pixies in college, well after the release of Doolittle and the band had gone on hiatus.  Unlike some bands that I might disconnect with for one reason or another, then come back to later on, my love for the Pixies has remained constant for all these years.  I always regretted that I never saw the Pixies back in the day, but in my own defense, I don't recall having the opportunity.  We were never both in the same place in the same time, it seems.  Yeah, I saw Frank Black doing his solo thing a few times in the interim, but in as much as I enjoy his solo stuff, in no way does it compare to the Pixies (as it shouldn't, that wasn't the point).  Fast forward to 2004 when the band suddenly reunited and toured.  I was already shocked by that, and even more so when I discovered they were skipping my city but playing at a damn arena in a tiny town a few hours away.  A group of us immediately started making plans to go, but the show was smack dab in the middle of the week.  Seeing as we would've stayed overnight, I had to back out because of a work conflict.  I remember saying, "I have a feeling I'll never forgive myself for missing this show", which is exactly what I said when I opted not to fork over the money to go see the Beastie Boys in L.A. in 2007, and we see what happened after that (R.I.P. Adam Yauch, and no, I haven't forgiven myself).

When that reunion tour was announced, I joined their email listserv to keep myself in the Pixies loop, but once that tour was over, there was virtually no communication for years, minus a few random emails about stuff that didn't do me any good.  Like concert dates in Australia and Europe.  Things were very quiet on their end overall, and it seemed they were back on hiatus.  And I continued to kick myself for missing that show in 2004.  Then suddenly last year, I started getting emails.  One of the earlier ones informed me that bassist Kim Deal left the band.  I kicked myself again, thinking I was screwed and there would be no more Pixies.  But shortly thereafter, I got more emails.  Emails with new tracks, then videos, and then, lo and behold, concert dates!  And my city was on the list!  I bought tickets the exact moment they went on sale and got great seats.  This was last fall and the show seemed so damn far away.  I was chomping at the bit for some live Pixies, and it felt like I was having to wait forever.  But the day arrived!  I didn't care if there was a -20 degree wind chill that day, and the ground was a frozen tundra of ice, and I had to park a mile away because there was also a goddamn hockey game next door at the same time- my ass was gonna be there!  And it was.  And it was simply awesome and they sounded great and pretty much played everything I wanted to hear.  Black Francis has such an interesting voice.  He can go from soft melodies to ripping and tearing at the drop of a hat.  I was a tad worried about the absence of Kim Deal, and although I did miss her a bit vocally, the current replacement did a stand up job.  I heard, by the way, that the original placement was given the boot after stage-diving into the crowd at a show early in the tour.  Black Francis supposedly said to her immediately following that show (I'm sure with his usual straight, stern face), "The Pixies don't stage dive", and promptly fired her ass.  I believe that story, because for whatever reason, as much as I love him, Black Francis has always come across as a big asshole to me.

Anywho, the show was well worth the 25 year wait, and I am thankful not to have another Beastie Boys situation weighing on me for the rest of my life.  Here are some pics I took at the show: 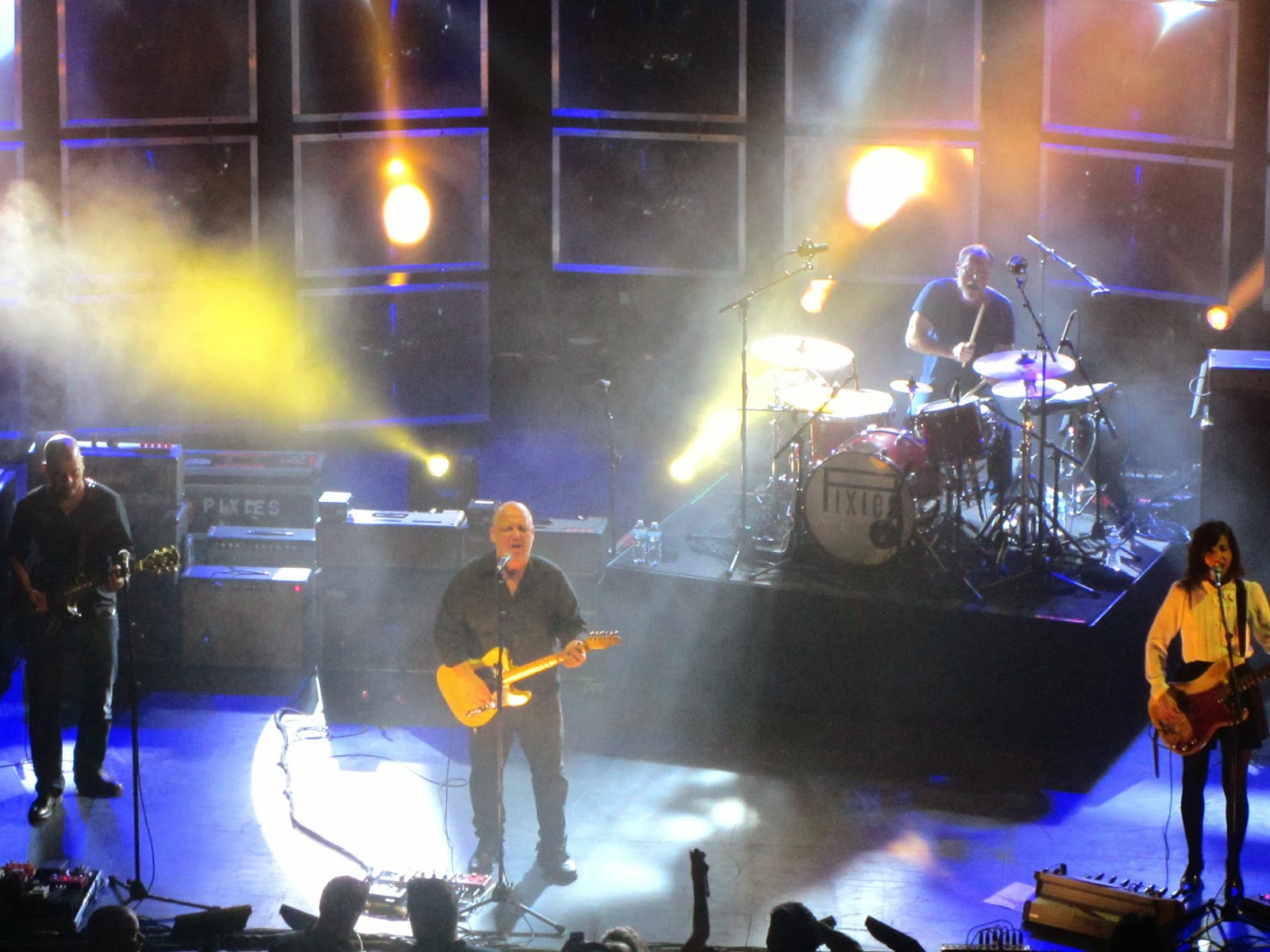 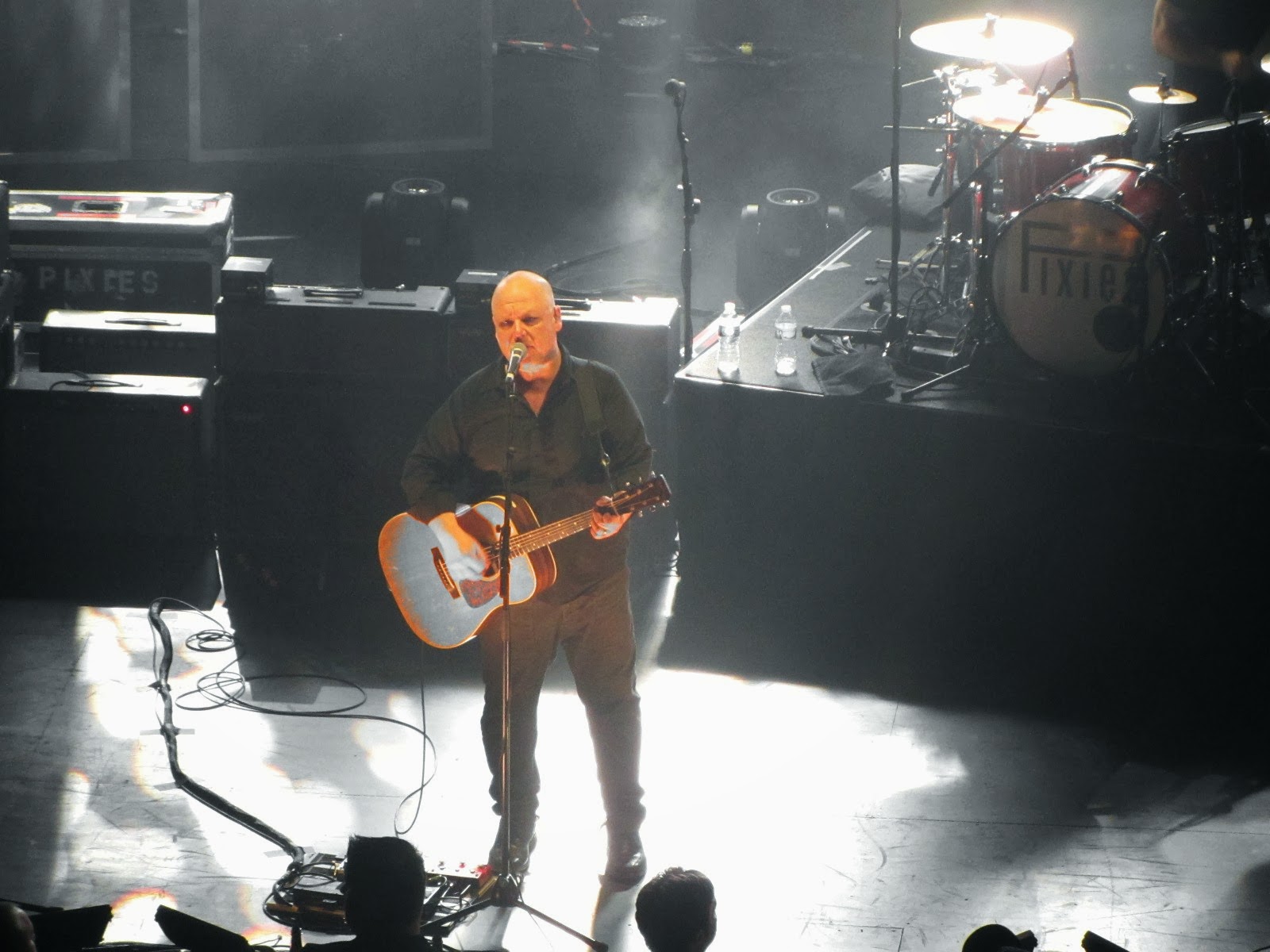 For good measure, I had to include a video.  I found this gem from 1990 on ye ole YouTube.  My god, they look like babies.  I guess I did too back then.  A baby with big hair leftover from the 80s.  Shit, I was really young, and this was about the time that I fell in love with this band.  If I had to pick a favorite song by the Pixies, this would be it.

Posted by KickinAssTakingNames at 10:35 AM No comments: Links to this post