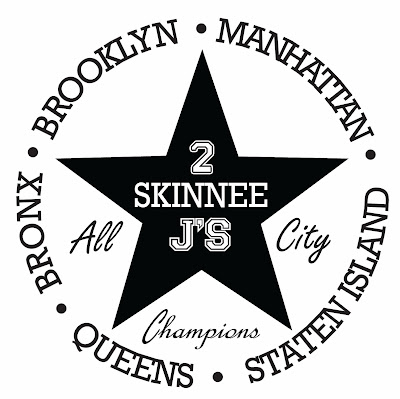 Way back when in the 1990's, there lived a band called the 2 Skinnee J's.  They are described by the annoying term "nerdcore hip hop", but I like this description from their Twitter page better:  "If Public Enemy had a schoolyard fight with Devo, it would sound like 2SJ".  That's actually very fitting in a lot of ways.  I discovered them in the mid 90's when they opened up for one of my all-time favorite bands.  A band from my hometown who still has a huge following locally, but only had minor success nationally for a quick minute many years ago.  Anyway, I think it was night two of one of their annual 3-show Christmas extravaganzas that I first laid eyes and ears upon the 2SJs.  I was immediately hooked, as was my BFF who was with me at that show.  We became big fans, and over the next 4-5 years saw them live maybe 5 or 6 times.  They had a solid cult following around the country, and saw minimal mainstream success.  I believe the last time we saw them was at an all-day music festival, which was sponsored by a local radio station that our good friend was working for at the time.  He got us backstage, and we got to hang out with the Js and the rest of the band for a bit after the show.  The Js ARE skinny indeed.  Very slight and shorter than they appear on stage.  They were friendly and very non-rock star acting.  I don't remember much else, other than feeling like a giddy school girl because I was hangin' with the 2SJs!.  I think they broke up within a year of so of that show, because I recall in conversation with one of them he alluded to there being trouble in paradise.  I was bummed out when they split, and have remained bummed out since then.  Every so often I think of them for no apparent reason, and get out my SuperMercado! CD and keep it in my car for a good month or so, listening to it dozens of times before I've had my fill and it's put away again for a while.  I recite every line of every song.  Every.  Damn.  One.  If you are going to listen to one album by this band, make it this one.  Superb album.

I just happened to enter one of those 2SJ phases in the last 24 hours, again for no apparent reason, which prompted me to do some Googling to see what they are up to.  I discovered some rumors floating around their Facebook page that they might be getting the band back together next year!  Please, oh please let this be true!  I don't want to get too excited, but I did notice in my research that they are marketing the hell out of their merchandise all the sudden, and they also played a limited number of random shows in recent years that I was unaware of.  And according to some (all) of the YouTube videos I scoured from those shows, they rocked and had the venues packed.  So, based on the facts presented I'm going to choose to believe this awesome rumor, as I'm mildly depressed because my job is making my life miserable and this gives me something to look forward to.

Here's one of the videos I found, just to share a sample.  This is my favorite song by them.  And I love belting out this line:  "A hallucinogenic, my phonetics get frenetic when I said it my hyperbole is hyper, my energy kinetic".  Yeah, try rapping that one folks.  Not as easy as it appears.  The show looks like so much fun I can barely stand to just sit in a chair and watch it.  Love the stage crashers.

Posted by KickinAssTakingNames at 11:11 AM No comments: Links to this post

A few months ago I saw a sweet double bill consisting of Iron Maiden and Megadeth.  I became a huge Maiden fan back in my early high school days, but somehow in all these years never saw them live.  I had pretty much assumed that moment would never come, but lo and behold the band is back together and making new music!  I was so thrilled about it, they would've had to really suck it up for me to be disappointed.  Still, I did expect them to sound a bit below par, and figured Bruce's voice would show signs of wear.  I don't think that is a stretch considering their heyday was 30 years ago.

Well, once again, my pessimism paid off, because I was overly surprised by how tight the band sounded and how strong Bruce's vocals were.  He can still hit those high notes!  And they sound great!  And not only that, but Bruce ran around that stage like he was on the first tour of his life with something to prove.  Everything about it was superb, including the setlist.  It was worth the price of admission alone just to hear "Run to the Hills" live.  I admit it brought tears to my eyes.  For a brief moment, I was completely transported back to the early 80's, as I sang with reckless abandon and recalled a much simpler time when I had no worries or responsibilities other than to rock my face off.  I let off a lot of stress and joy and angst during that song.  It was better than therapy.

I am a Megadeth fan, but let's not be mistaken.  This night was all about Maiden for me.  Megadeth did show their age a bit, but since I had never seen them live before either, I still enjoyed their set and the experience of seeing them in person.  Other people I know who were at the show and had seen Megadeth multiple times said they sounded terrible, but I had nothing to compare to, so I was okay with it.

I've said it before and I'll say it again....you'll never find a nicer crowd than you will at a metal show.  Yeah, there might be exceptions when it comes to certain metal genres, and I can't vouch for a lot of newer metal bands and their younger crowds, but when it comes to good ol' classic heavy metal, everyone is automatically friends through a mutual love of ye almighty headbanging, and it's simply divine when that happens.  When "Run to the Hills" started, my idiot friend had gone to the bathroom (I warned her it was probably bad timing).  When the song got going, I thought "goddamn mother fucker...this song is bringing memories and tears and a big potpourri of emotions to the forefront right now, and I'm all by myself!".  Granted, I was surrounded by a few thousand other people, but at that moment, I needed to connect with someone over what was happening.  Does that make sense to anyone else, or am I alone in this experience?  Anywho, as Bruce headed into the chorus for the first time, and I'm feeling like a volcano full of emotion about to explode, suddenly an alone guy across the aisle and I made eye contact (his friend was also gone, I realized) and within a split second we simultaneously met in the middle of the aisle, put our arms around each others' shoulders like old pals, and belted out that chorus in unison, while fist pumping, along with every single other human being in the joint.  We proceeded to sing the rest of the song like that.  We never spoke, never introduced ourselves, nothing.  Just two early 40-something metalheads, strangers, connecting over a past they never shared.  When the song was over, we high-5ed each other with a thankful look in our eyes for being there for each other, and went our separate sides of the aisle.  It was awesome.  Here are a few pics from the show: 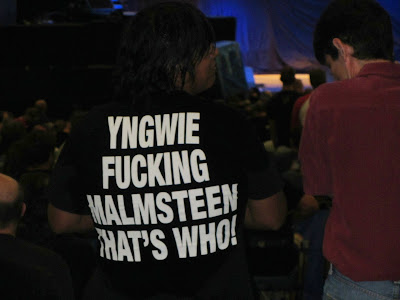 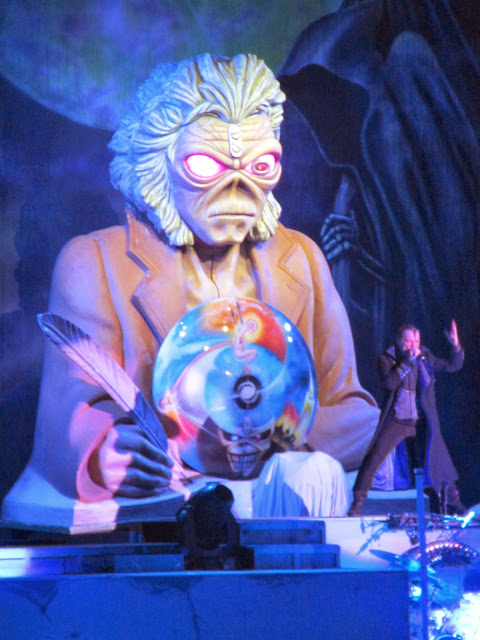 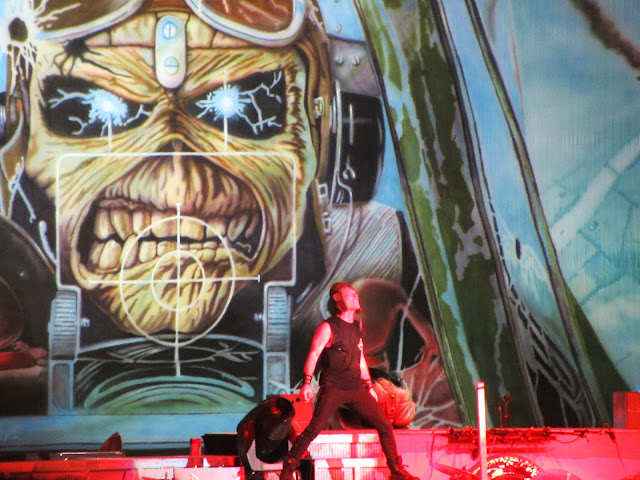 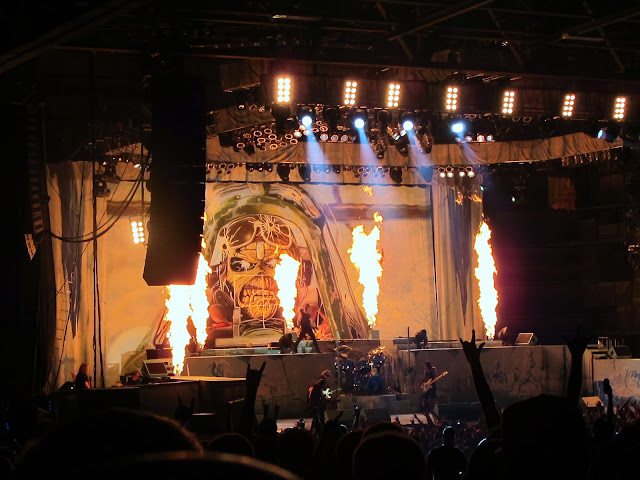 Posted by KickinAssTakingNames at 10:39 AM No comments: Links to this post