Happy Holidays! And Other Stuff.

My weekend included a meal so delicious I had to share.  Feast your eyes on this feast: 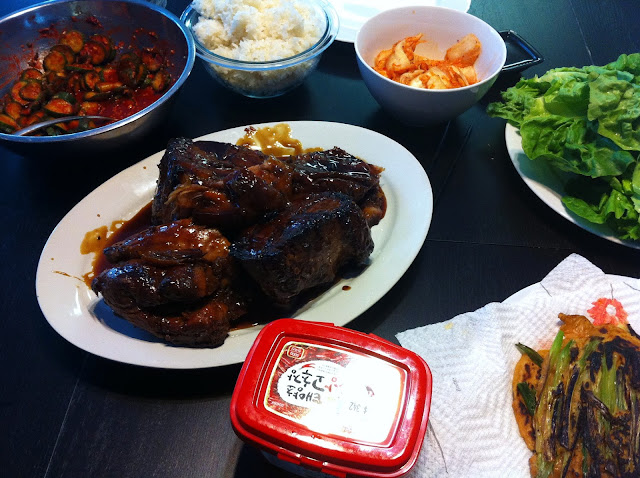 What you see there is a homemade Korean feast, courtesy of some very Caucasian friends of mine who happen to be into all things Korea.  We share a love of Korean cuisine and trying to create it on our own.  Except that the farthest I've gotten is mastering Korean-style chicken wings, whereas my friends, on the other hand, do fancier, much more involved things like you see above.  What you are looking at is one of the best pork dishes I've ever had.  I'm a huge fan of pork (that's what she said), especially the slow-cooked, shredded variety.  This is exactly that, along with some special seasonings and a coating that involves, among other things, dark brown sugar.  It doesn't end up overly sweet, just enough to balance the salty, but what does happen is the sugar creates a crust on the outside of the meat that is out of this world.  The traditional style is that everyone just goes at it, tearing off shreds of meat as they go, wrapping it in a lettuce leaf with some rice and a special spicy sauce, and eating like you'll never have such delicious pork again in your life.  At least that's how I approached it.  There was also some kimchi, scallion pancakes called Pajeon, and some crunchy pickling cucumbers drenched in a spicy sauce that involved potentially toxic amounts of Korean chili powder.  I've come to the conclusion that Korean food is probably the ultimate cuisine for me, despite a serious love of Thai and Mexican.  It often involves three of my favorite things:  pork, cabbage, and serious spicy heat.  The fact that they often like making things into pancake form is a bonus.
In other news, my new job that I bragged about not so long ago sucks royal ass.  I won't bore you with the details except to say that I got screwed and was not delivered the exact job I was promised.  In addition, the program I am working on, which I thought was going to be somewhat groundbreaking with far-reaching implications, is a complete joke.  That is not the fault of my employer but with, shall I say, a government entity who developed and sponsors the program.  They are not holding up their end of the bargain which means people are pissed which means I go home at night feeling like I screwed up peoples' lives even more as opposed to helping them.  It's not a good situation and once again, I am looking around for jobs.  Fuck. Me.
On the positive side, my final news of the day is that I'm gearing up for an Iron Maiden/Megadeth live double bill, and I am more than ready and prepared to release all of this anger and frustration at that show.  Thanks for throwing me a bone with the timing, universe.
Enjoy the remaining sliver of your holiday, my friends.
﻿
Posted by KickinAssTakingNames at 6:54 PM No comments: Links to this post