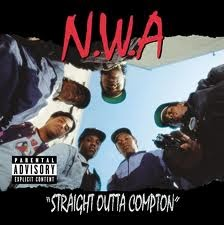 One of the best albums of all time, and definitely in the top 5 of all rap albums (possibly top 3 for me personally), was released 25 years ago today.  I'll spare you the split second of math/effort and let you know we're talking 1988 here.  What in the goddamn hell?!?  Is that possible?  I'm gonna date myself here for a moment and say that I was about to start my freshman year of college at that time.  Which feels like a motherfuckin' long ass time ago when I think of it that way.  Yet, when I only think about the music from this album, for some reason it doesn't feel like all that long ago.  Not sure why that is, but perhaps it is saying something about this masterpiece - like it is somewhat timeless.  Although the sound might be timeless, the style unfortunately isn't.  Man, this was when the genre of "rap" was in its early growth spurt and was totally awesome.  When the style du jour was what they call "hip hop", but not the same as what they call "hip hop" nowadays.  There is a difference.  I miss those days.  Nearly all of my favorite rap albums are from that era.  I do like a handful of current rap artists, but give me some Public Enemy, The D.O.C., Run DMC, Eric B/Rakim or Schoolly D any day of the week.  This album is also often considered the beginning of what they call "gangsta rap", which I don't typically consider myself to be a huge fan of, but yet in the old days, in the old way, it didn't turn me off like a lot of current gangsta rap does now.  I really don't care all that much about the violence-promoting aspect of it.  I mean, in some ways, yes, it's probably bad for little kids to hear that kind of thing.  But I can't fully go there because I'm the 40-something lady who regularly listens to The D.O.C. song "The Grand Finale" at full blast in her car and raps along with Eazy-E's portion of it at the top of her lungs when he says (raps), ..."Fuck the car, I'll do a motherfuckin' walk-by".  AND I do it with a hardass look on my face while flailing my arms and making what I think might be gang symbols at whomever might be driving next to me.  Great lyric from, in my opinion, the best rap album of all time and one that was WAY, WAY overlooked by the masses.  But I digress, because today is about N.W.A.  Rest in peace, Eazy-E and thanks for the continued good times.  Motherfuckin' walk-by.  Classic.
Posted by KickinAssTakingNames at 7:49 PM No comments: Links to this post