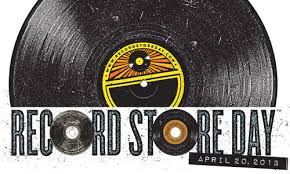 Happy holidays, folks.  It's Record Store Day!  Record stores all over the nation are celebrating with special releases, live music, and other sorts of shenanigans.  Go out and buy some vinyl!

Not to be ignored, it's also 420 day!  Too bad I'm on the verge of getting a new job and can't celebrate.

Things have been rather busy around these parts, hence my absence.  As mentioned, I've been in talks for a new job.  This is a good thing, as the grant that funds my job is coming to an end in a few months and doesn't look like it will be renewed, so at least I know I will remain employed.  Unlike previous job searches, this one didn't require a whole lot of effort.  One I came across via networking, the other came to me when they found out the other place was pursuing me.  I've never been in that position before, and I must say, it feels good to be fought over.  In a nutshell, they are essentially the same job, working on the same project, but the agencies are very different.  One is smaller but growing rapidly and is new to me and new to this project they are undertaking.  The other is a large entity who has done projects like this before, know exactly what they're doing, and I know what I'm getting into personnel-wise and otherwise, as I've been doing contract work on the side for them for the past year.  I'm pretty excited, as both are good jobs, both are a step up on the ol' ladder of responsibility, and both have future potential.  As easy as it came about, though, the whole process has been completely exhausting and ultimately became complicated.  Because it all came about in such a convoluted, unconventional way, in the past month I've had multiple random talks with each, a few "official" interviews (both almost 3 hours long), follow-up talks, salary/perk negotiations, etc.  My brain is tired of thinking about it and weighing the pros and cons.  What makes it complicated, you ask?  Well, of course, the worst-case scenario came true.  I finally determined the familiar entity was the best match, only to find that the other one offered me substantially more money.  Substantially.  Frankly, I was shocked and am still unsure how they could offer me as much as they did being so small.  As excited as I was at first, I eventually developed some reservations about it that have become increasingly pronounced, and I can't ignore my gut.  I don't want to make a decision based on money, because I feel that's bad karma and is simply not something I'm comfortable with.  More importantly, I have learned the hard way too many times in my life not to cross my gut.  The gut knows.  Yet, at the same time, I need to do things like pay bills, buy a new car to replace my dying one, and maybe retire someday.  I had to turn on my negotiating skills with the other, which I suck at and abhor.  But the salary they offered is way too low for the position and for my experience, and although I knew all along they could never match the other offer, if they can just meet in the middle I'd accept it in a heartbeat.  So now I wait for their response.  They said they are "willing to fight" for me, but I also know they only have so much money to work with, so I can only hope they can improve their offer enough that warrants taking it.  If so, it would ultimately be a boost in pay, although a much less noticeable one than the other.  But long term happiness is crucial, as is work/life balance, and I know that this job would provide that.  I also thrive on organization and knowing they have a system down, whereas the other place would essentially be winging it.  If they come back with a lower-than-desired amount, well, then I'm fucked because I will almost feel forced to take the other job that I feel a bit uneasy about.  Please keep your fingers crossed for me.

In other news, I'm just bought tickets for an Iron Maiden/Megadeth double bill later this year.  Woot!  I've never seen Iron Maiden so I'm thrilled about this.  Adding Megadeth to the bill is just gravy.  I look forward to rocking my face off.

I went to see the new Rob Zombie flick, Lords of Salem, on its opening night yesterday.  I've seen all the Rob Zombie movies and have liked them, some more than others.  This one was entertaining enough, but overall it's definitely not his best effort.  Except for a few brief scenes, it wasn't really scary, per se.  Which is ok, except that I was hoping to jump out of my seat a few times.  I would describe it more as disturbing and, basically, pretty fucked up.  Rob Zombie's movies are usually pretty high on the fucked up scale, and this was no different.  It's full of evil and I did walk out of there feeling a bit uneasy about what I had just witnessed.  It started out rather slow, though, and, in my opinion, was a bit disjointed and left some unanswered questions.  I need closure, people!  I don't like to be left hanging.  Regardless, I rarely go to movies at the theater so I enjoyed it for the sake of that, and I also enjoyed the popcorn, Dots, and peanut M&Ms.  It's all about the snacks.  Here's a trailer for a sneak peak:

That's it from KATN Central.  Hope all is well in your world.  I'm talkin' to you, my 3 readers.  Maybe 2 at this point.
Posted by KickinAssTakingNames at 10:22 AM No comments: Links to this post