Despite the fact that my favorite local watering hole looks scary and crappy from the outside, has a jukebox full of classic punk rock, caters to a crowd that involves a lot of black clothing, tattoos and piercings, and sells 24 oz. cans of Stag Ice for $2, they oddly also have 3-4 flavors of homemade infused vodkas/rums available most of the time.  They also have a free hand lotion dispenser with SIX different scents in the ladies bathroom, which also seems out of place, but that's another topic for another day.

One of the infused boozes that they have been making for some time is made with Lemonheads, and I've become borderline addicted to the stuff.  Sometimes it's vodka and sometimes it's rum, but I've been ordering it every single time I go, and a few weeks ago I left there hell bent on making myself a batch.  Which turned into a second batch last week, as I decided to bottle some up and give them to my pals on their birthday outing last Saturday.  You can't go wrong with the gift of booze, right?  So, I thought I would share with you readers this highly complicated recipe.  Ready?

Here are the cast of characters.  Take notes, you might forget something. 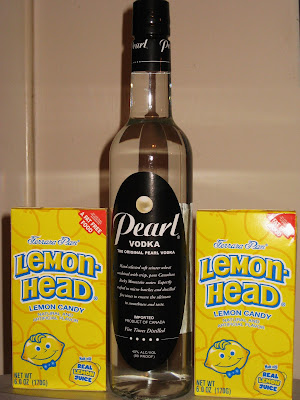 As you can see, I opted to use vodka.  Rum is equally delicious.  I opted for the Pearl because I wanted something middle-of-the-road, and this was on sale.  For one bottle I used two 6-oz. boxes of Lemonheads.  Many say they use 16 oz., but I didn't feel like buying an extra box and I also had a feeling that a full pound would be a little too sweet for my taste.  I was right, because this turned out just about perfectly.

You will need something to infuse the vodka in.  Either one huge jar, or make do like me and use what you have and divide it in half.  I used an empty pickle jar and kept the other half in the bottle.  Then I added a box of candy to each.  Shake vigorously for a minute or two.  It will look like this: 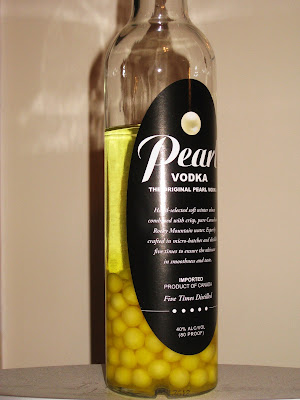 Let it sit for the next 24 hrs. or so, and shake it up every once in a while when you pass by.  Some of those stubborn little candy cores want to stick together at the bottom, and it's like a war trying to shake those bastards off.

Did I mention that this beverage is delicious AND nutritious?  Loaded with vitamin C! 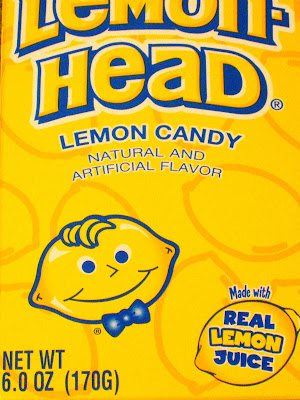 Here's the finished product, ready to be delivered to my pals: 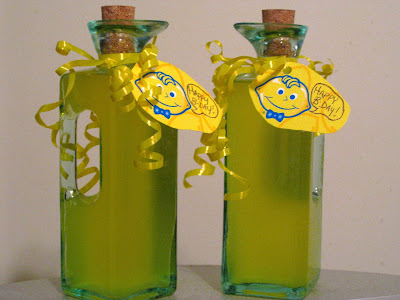 At the bar they have a shot they make with this stuff.  I don't know what all is in it, but it involves the Lemonhead booze, and they call it Electric Cat Piss.  You can see why.  They should have a crayon of this color with that name: 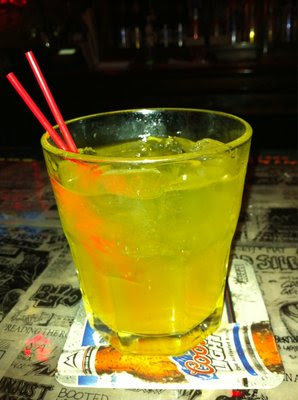 Almost forgot to mention....after it's ready you can filter it if you want, using coffee filters.  I didn't do it to my batch, which has a slight, white, sugary film that forms on the top until I shake it up.  But since I was giving the second batch away, I decided to experiment with filtering, to see if I liked it better that way.  It did get rid of the film, which wasn't all that bad to begin with, but it does look a tiny bit more clear overall.  However, it's a pain in the ass, because the sugar has thickened the booze a bit and it is VERY SLOW moving through the filter.  And I am VERY IMPATIENT.  So that part was annoying, but I was pleased with the final product.  This mixes well with just about anything, but I prefer club soda because the candy sweetens it so much it's too sweet for me with anything else.  But I imagine it would otherwise be delicious with all sorts of mixers.

Make some for Labor Day!  Enjoy!
Posted by KickinAssTakingNames at 7:01 PM No comments: Links to this post

Posted by KickinAssTakingNames at 6:59 PM 3 comments: Links to this post


It's "Left-Handers Day"! Which is a weird way to say it, but hey, I'm one of the lonely 10% who is shunned by society, so I'll take any holiday and feeling of superiority I can get no matter how grammatically strange it is!﻿

Yes, you heard me, I said "shunned by society".  Perhaps that is a wee bit dramatic, but to a small degree is true.  Allow me my Day, will you?  You have no idea what I've been through.  I have been forced to learn to use scissors with my right hand.  I get ink all over myself because as soon as I write, my hand is on top of it.  Spiral notebooks are my worst enemy.  As a kid I couldn't play putt-putt at parties because - you guessed it - no left handed clubs (they weren't always universal like today).  In every game of softball I've played when I'm up to bat, I've had to endure the pitcher's dark announcement to his entire team, "Uh oh everybody, it's a lefty", and then proceed to get walked because the pitcher can't get the ball anywhere near the damn plate.  To this day I continue to hear the exclamation "OMG, you're left-handed?", like I'm some sort of freak.  And I guess I am an anomaly of sorts, because I somehow managed to escape the environmental conditioning that the other 90% is oblivious to that has tried and tried to force me to be right-handed.

You know what, world?  You can suck it, because I'm a lefty and I love it.  I like being a weirdo in the 10% (although I wish I was in the 1%). You know those stickers on Jeeps that say, "It's a Jeep thing, you wouldn't understand"?  Well, us lefties have that too.  When we find each other, we bond quickly and automatically assume the other is a cool human being.  We are survivors.  We are outcasts of society together.  We are deviants from the norm whose right brains dominate.  We are actually all ambidextrous to some degree, because you, society, force us to be.  So try all you want, but us lefties are not going anywhere.  We even have our own Day now.  And although I haven't bothered to Google it, I'm pretty sure you don't.
Posted by KickinAssTakingNames at 6:36 PM 1 comment: Links to this post

What in the Goddamn Hell?!?

It's still hotter than fuck in my neck of the woods.  Still dry as the desert.  Last night at 11pm it was 85 degrees, which may not sound so bad until I tell you it was 78% humidity, which made the "feels like" temp a seriously thick, sticky 92.  I'm still on the verge of snapping, and I'm starting to feel like it's never going to end.  It has created occasional pangs of anxiety if I let myself thing about it too long.  It has brought me to tears on more than one occasion.  Week after week I survive this ridiculousness and try to think positively, "Ok, this has GOT to break soon.  It's coming".  And then I look at the 10-day outlook and see, yet again, nothing below 98 in sight.  Keep in mind that the last three summers in a row have been the hottest on record in my lifetime.  I mean, WTF is going on?  Is this how it's gonna be from now on?  Because if so, I gotsta go.

I just read a recap of last month's weather, and here are some "highlights":


We are 8.7 inches below normal for the year in rainfall.  We are currently in the "extreme" drought category, and from what I hear not far from entering the "exceptional" stage (worst it can get).  Everything is dead around here.  Driving around, you see brown lawn after brown lawn, interspersed with an occasional freakishly green one, singling those people out as the drainers of our decreasing water supply.  Speaking of lawns, the one upside of this drought is that you don't have to cut the grass, because it's completely stopped growing.  Huge, old trees are dying.  It's terrible and depressing and only exacerbates my fear of fire.

On a positive note, I woke up today to some light showers, which went on/off for about an hour or two.  It wasn't much, but it was something.  And because the sky is starting to clear and we are looking at a high of 100 again, there is a fairly good chance for some strong thunderstorms tonight.  The best chance for rain we've had in a while - 60%.  Unfortunately the overall future outlook isn't good here or in other states that has been affected by this heat wave.  The outlook here through October shows the same trend continuing, with above-average temps and below average rainfall.  If we have another warm, dry winter like last year (which contributed to this whole mess), then we're royally screwed.