I recently saw G. Love and Special Sauce perform for the first time in years.  I've been a big G. Love fan since his first album when he sucked me in with the song Cold Beverage.  I haven't seen him in a while because the last few times he came through town he played larger venues or festivals, which I have learned over time is not the way to see G. Love perform live.  He's just one of those artists who needs to be seen and heard up close and personal.  And if you've had that chance, you know what I mean because his shows feel very personal and intimate.  Which is one of the reasons I adore him.  He always seems to be truly enjoying himself, like he wouldn't want to be anywhere else other than where he is playing in that moment.  He interacts with the fans with a smile so genuine you feel like he's your long lost pal.  It's nice to see an artist that seems humble and thankful and clearly loving his job.   I should also add that he's very easy on the eyes.

This time around, I saw G. Love at a tiny venue that holds maybe 250 people.  I was able to stand center stage about 3 people deep the entire time.  So close I could've touched him, and I very much did want to touch him, but I didn't.  I was too busy being the annoying lady taking countless photos and videos, in between spurts of singing and dancing.  It was a great show and he sounded superb both vocally and musically.  The bassist kicked some serious ass, and had the coolest upright bass I've ever laid my eyes on.  Have I told you I'm a sucker for an upright bass?  Well I am.  Big time.  This concert experience sealed the deal that I will never go see G. Love in a big venue again.  It's not that he can't pull off a larger scale show, it's just that his sound, style and personality are better suited for a cozy setting.  It's who he is, and it's where he shines.  He clearly knows this, because at one point during the show he actually commented on the venue, saying something about having looked around town over the years for a place to play that had the "vibe" he was looking for, implying he'd found it.  Validation!  Now I can finally stop feeling guilty for not having enjoyed him so much at those bigger shows, and for skipping his gigs altogther the past few years.  He understands.  This show was money well spent and worth the wait.  Here are some pics: 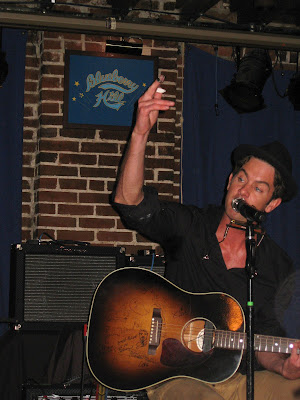 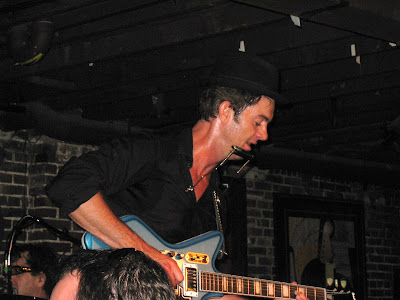 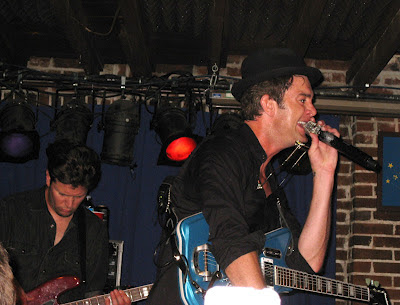 During the show G. Love gave a shout-out to my beloved Beastie Boy MCA by doing a medly that started out with the first few verses of Paul Revere.  If that wasn't already awesome, he followed that with a completely unheard of shout-out to Schooly D (Parkside 52) (I had no idea anyone other than me loved that song), then wrapped it all up with the tail end of his own classic Can't Go Back to Jersey".  Here's video proof:


At the end of the show, G. Love said his goodbyes.  This is visual proof of what I was talking about earlier.  There's no way it's an act.  That face is way too friendly and real.  Love that face.  Go see G. Love!

Posted by KickinAssTakingNames at 11:15 AM No comments: Links to this post 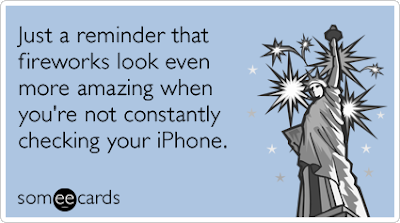 I hope you fine people enjoy America's birthday today.  I'm going to do my best, but this heat has got me down.  I'm not only a raving bitch at the drop of a hat, but the cumulative effect of 100+ temps for days had me on the verge of vomiting by Monday.  I made the unfortunate mistake of being outside way too much over the weekend, which I couldn't really avoid but managed to cope with by imagining how good it was going to feel to get home and take a shower.  That's how I get through any extended period of time outside on a hot day, by the way.  It actually helps a little bit.  My plan today will involve the following:  the indoors, air conditioning, a few beers, and bitching about the heat with some friends.  Then I will come home early to do laundry and get ready to head out of town over the weekend to visit some family.  It's a very exciting life I lead.  I'd love to see some fireworks, but because it continues to be so hot and dry here, nearly all fireworks around town have been cancelled due to the fire risk.  Downtown is still on, which are the best ones of course, but in as much as I love me some fireworks, I can't fathom sitting outside for even 20 minutes to watch them.  This will be the 8th day in a row that the temperature is over 100.  It won't end until the weekend while I'm gone.  At least when I come back it will be back in the lower 90's.  Something to look forward to.  Well, that and winter.  But at this point I must take it one day at a time.  Happy celebrating, my friends.
Posted by KickinAssTakingNames at 11:52 AM No comments: Links to this post