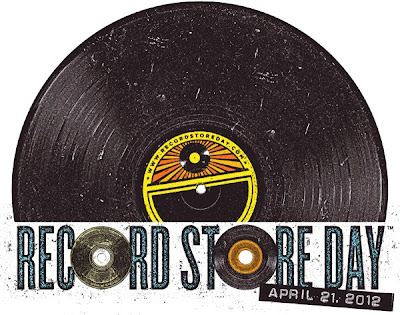 And while I'm at it, a belated happy 420 to my fine reader(s).  I hope you celebrated properly.  Do you know the origin of the term 420/4:20/4/20?  I didn't until about 3 minutes ago.  It's interesting how weird things such as this get started and catch on.  My brother is firmly convinced he coined the phrase "bummer".  I highly doubt that is the case but I'll let the man dream.

In honor of 420, here's Dash Rip Rock's video for Let's Go Smoke Some Pot.  Classic tune.  I had no idea they ever did a video for this song.  They look so young.  If you're not familiar with Dash Rip Rock, I encourage you to investigate.  They aren't the most talented bunch you're ever going to see, but they are a fun party band who never fails to entertain the crowd.

Posted by KickinAssTakingNames at 9:59 AM No comments: Links to this post

I had never heard of Guitar Wolf until a friend mentioned going to their upcoming show.  He encouraged me to go.  He told me they are a Japanese punk band, and I responded, "I'm in".  It was as simple as that.  How often do you get to see a Japanese band perform live?  I'll tell you how often.  Apparently it's once every 26 years, because the last and only other time I ever saw a Japanese band perform, it was in 1986 when Loudness opened for Mötley Crüe on their Theatre of Pain tour.  I could be dead by the time another 26-year cycle completes, so I had to go to this show.

The Japanese culture is very interesting to me.  There is the serious, proper, focused, reserved side, but then there is this completely wacky, eccentric, downright fucking crazy side as well.  It's so odd and interesting to me.  This cultural intrigue alone makes any Japanese band cool in my book.  At least any that are good enough to make it to the U.S.  I also was also attracted to this show because, after I did some research, I learned that they formed in 1987, which to me meant their style would be more old-school, which I prefer when it comes to punk.  Of course, there was also the draw of the language barrier, as I knew that these guys speak very limited English.  VERY limited.  That would surely make things more interesting.

I will admit that on the way to the show, we were randomly spouting off things the band might say in very bad, stereotypical Asian/Engrish accents.  Stuff like, "Lock and Loll!", and, "One, two, free, fo'!".   Terrible, I know.  But that car ride alone had me in tears and already feeling like the night was worth the price of the ticket.

All in all, it was a really good show.  Guitar Wolf's style was exactly what I was expecting, but they did surprise me with their ability to completely SHRED on the guitar.  I like surprises.  As we surmised, their ability to communicate with the audience was limited, and I have to say, very comical and entertaining in and of itself.  The band never stopped trying, though, and the crowd didn't give up trying to comprehend what the fuck they were saying or telling us to do.  When these moments occurred, the place would become nearly silent.  Silent because, if there was any chance in hell we were going to understand what the singer was trying to say, we needed to hear him clearly and we needed to concentrate.  There were a few times it took at least 2-3 awkwardly long minutes of constant repetition, while the crowd looked at each other like, "WTF is he saying?", before something would click and it would all make sense and then the crowd would go wild again.  There was one time, though, when we never did figure out what he was saying, but everyone just went with it and tried to fake it because none of us could tolerate the awkwardness any longer.  It was classic.

The crowd was different than I expected.  Sure, there were some classic punk rock types there, but there were a lot of regular Joes there too, and lots of folks in the 35-45 age range.  I realize the band formed in 1987, but I still thought the crowd would be much younger.  Most punk crowds are.  Once the initial fascination wore off and everyone could stop staring and concentrating and just let go once in a while, it got really entertaining.  Lots of crowd surfing, lots of people on stage, a human pyramid with the lead singer on top.  You know, typical punk rock show stuff.  Here is a photo of the lead singer crowd surfing. 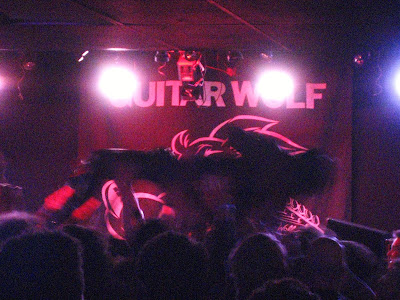 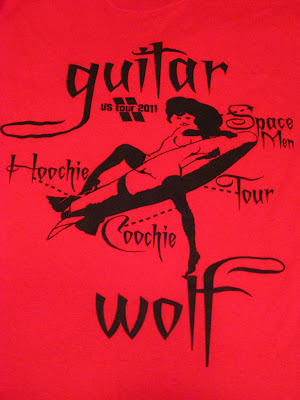 The following video I took is probably the one that best sums up this show.  This was during a 2nd surprise encore that no one saw coming.  The overhead music had come on (a.k.a. show over) and people had been filing out of the venue for at least 5 full minutes.  My pals and I happened to be standing outside talking to other patrons when all the sudden we heard music again.  Everyone ran back inside and the band proceeded to play for another 10 minutes or so to half the original crowd.  It was super sweet and impromptu and I loved them for it.  Plus, I got a better viewing spot.  I picked this video because it has all the essential elements:  rockin' Japanese song with limited English shout-outs, shredding guitar spots, obligatory spiked-mohawk at center stage, slam dancing, crowd surfing, and the ending.  Oh, the ending is priceless.  SPOILER ALERT:  At the end of the song the singer says very loudly and clearly, in an attempt to express his appreciation to the crowd, "I Rove.....I Rove Rou!".  He's struggling to get it out, to say it as best he can, and it comes out in pure, unadulterated, stereotypical EngrishRou.  As usual, I apologize for the poor quality.  I'm in the market for a new camera, so better videos might be on the horizon.

Posted by KickinAssTakingNames at 8:34 AM 2 comments: Links to this post

Aawwwww yeah, it's official.  BRING IT.
Posted by KickinAssTakingNames at 8:06 AM No comments: Links to this post