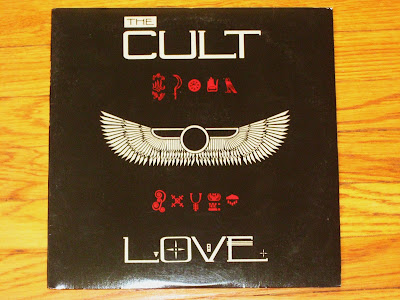 I'm a huge fan of the band The Cult.  They are definitely one of my top 10 favorite bands of all time, and in my top 5 as far as live shows go.  I find them to be rather unique in the music world.  It's 4 guys with basic instruments and no frills, yet they put out some goddamn loud, rockin' sound that cannot be classified by any one genre.
Since I'm back into vinyl, I've been on a quest for some Cult on album.  I never owned any back in the day.  My first exposure to them was in my early teen years.  Back then, they were called the Southern Death Cult, and they were heavy on the punk and goth rock influence.  I remember always wanting to buy that album back then, but for some reason never got around to it, only to forget about the band altogether at some point (they never had mainstream popularity and faded away pretty quickly), until years later when I was first exposed to The Cult's album Love.  When I first heard it, I immediately recognized the voice.  A voice that I could never forget, because something about it makes me swoon.  The rest, as you know, is history.  Love was The Cult's breakthrough album that brought them mainstream success in the mid 80's.  I love these guys because they are different.  They came from England when punk was all the rage and they took those influences and did something different with them, which was heavily criticized at the time, yet developed a cult following (no pun intended).  Southern Death Cult lasted less than 2 years before singer Ian Astbury joined up with guitarist Billy Duffy to form Death Cult, which quickly evolved into The Cult that we know today.  Along the way, they kept those punk and goth influences to varying degrees, blending in some classic hard rock, a little metal, and even some 80's, new-wavish qualities.  Their sound is odd blend of a lot of stuff that somehow works beautifully, and to this day, cannot be compared to anyone else out there.  That is why I love The Cult.

So, now that you understand my love of this band, you will be happy to know that I've had some major success in my album search.  When The Cult reached popularity in the 80's, the world had already gone cassette.  Hence, making their albums a bit hard to find.  But miraculously, after spending 4 hours in the most insanely packed (to the ceiling) record store I've ever seen, I spotted the album Love staring at me from a "new arrivals" bin next to the register.  It was right there in the front of the stack, just waiting for me.  I didn't even look at the condition.  I wanted it.  I had to have it.  And it wanted me, as I felt this was no coincidence.  I shouted in excitement and added it to my pile.  I didn't even know how much they were asking, but it ends up it was only $8.00.  And it's in mint condition.
Perhaps an even bigger find was this: 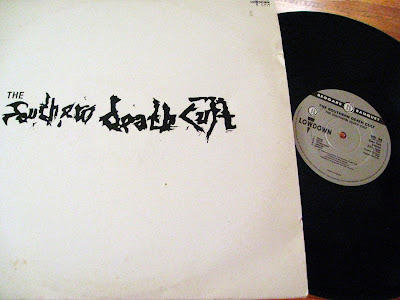 I got this precious gem from some sucker on Ebay who sold it for only $12.  This is rare, folks.  Very rare.  This was the only release from the Southern Death Cult, and it wasn't actually released until after they had disbanded.  In fact, by the time it was released in 1983, they had already morphed into modern day Cult, although none of us would know of them as such until a few years later.  It's all confusing, I know.   How odd is it that they released this one album long after the band, who was never that popular to begin with, had broken up?  Strange, indeed.  It's the crappiest recording you've ever heard, too.  Since they disbanded before recording it, the LP was created using various session and live recordings.  And it sounds like it.  Kinda like how Rerun's bootleg recording of the Doobie Brothers probably sounded when he snuck into the concert with a gigantic old-school tape recorder in his overcoat pocket (and was subsequently caught red-handed by the band).  Yes, I'm talking about Rerun from What's Happening!!  I love that episode.

Here's some vintage Southern Death Cult for ya:

Here's classic Cult in more recent years doing In the Clouds.  I had always liked that song, but it wasn't until I saw them perform it live for the first time on the '99 reunion tour that I fully appreciated it.

The Cult is about to release a new album on May 22nd called Choice of Weapon.  I'm beyond excited.  A tour is to follow, and if you want to rock your face off, I highly recommend you go if the opportunity presents itself.
Posted by KickinAssTakingNames at 1:35 PM