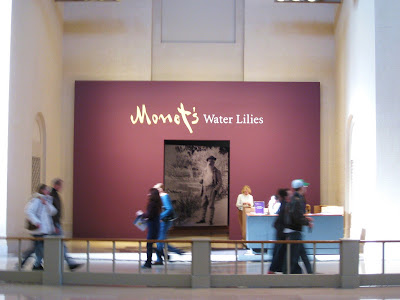 I recently had a once-in-a-lifetime chance to see Claude Monet's Agapanthus Triptych (aka Water Lilies).  I've long been a Monet fan and have been to a few exhibits of his work in my lifetime, but seeing the triptych in person was spectacular, awe-inspiring, and moving.  It reminded me of how I felt when I saw Michelangelo's David when I went to Florence.  You go into it knowing it's special, expecting it to be cool to see it in person, but then you get there and experience these masterpieces up close and you realize the extent of the greatness you are witnessing and it nearly brings a tear to your eye.  Or shall I say does bring a tear to your eye.  If you ever go to Florence, please go see David.  Thank you.

Anyway, back to the Agapanthus Triptych.  For those unaware, the triptych was the crowning glory of Monet's Water Lilies series.  The three pieces together total 42 feet and took him over 10 years to complete.  Late in the 1950's, the three pieces were separated and acquired by three different U.S. museums.  The current traveling exhibit is the first time the three works have been displayed together in over 30 years.  It's a small exhibit, as it's all about the triptych, but before you get to that, you see replicas of the original three panels - which started out as very different paintings.  Especially the left panel, which used to have a big Agapanthus plant in the forefront and is the reason for the title.  I say "used to" because Monet eventually painted over that completely.  That particular panel started out with much stronger lines and unusually bold, deep colors, but in the end, had flowing, fuzzy strokes and those soft, cool colors that only Monet could so perfectly achieve.  My guess is that his failing eyesight had something to do with how his strokes changed over the years, but the colors he started out with are what surprised me the most, as they were not what you think of when you think of Monet's Water Lilies series.  I wish I could show you all three panels as they started out, but those jerks in the museum said no photography allowed (other than the photo at the top, which is all I could get.  That's Mr. Monet inside the doorway.).

The display of the triptych itself was executed very simply, as it should be.  It's in its own large room with one giant custom-made frame around it, illuminated with minimal lighting from the top.  It's hung with a slight curvature to it, and as soon as you walk in you're engulfed by it's serene beauty, as if you're right there in the middle of Giverny at sunset.  It's as if it hugs you.  You feel it.  I got goosebumps.  Monet wanted it to be an experience, and he succeeded.  Here are some photos I found of the triptych displayed at one of the earlier exhibits last year: 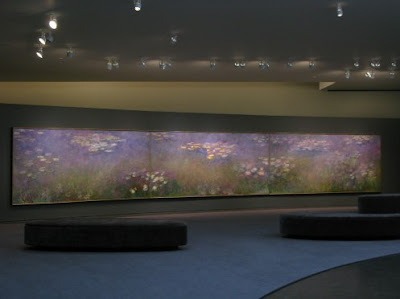 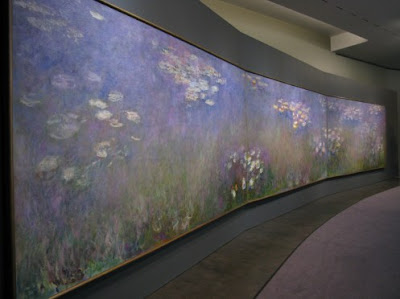 Those colors!  Such a breathtaking palette Mr. Monet had.  There should be a whole box of crayons called "Monet's Water Lilies".

I don't know where this exhibit is traveling to, but go see it if you can, because it might be your only chance.

Posted by KickinAssTakingNames at 11:02 AM