I Smell a Rat.

As you fine people know, I am intrigued by all things death, destruction, and mysterious.  This would include earthquakes.  Earthquakes freak my shit out.  My neck of the woods has a few faults surrounding it, but luckily none are too active.  Typically any quakes in this region are infrequent, very minor, and go unnoticed.  However, a few years ago we had a quake that was strong enough to jolt me out of bed in the middle of the night.  In the grand scheme of things it wasn’t all that major, but still, it was FREAKY.  I woke up not because of the movement, but because of the sound it made.  It was indescribable, eerie.  I had been in a deep sleep so I was a tad confused as to what the hell was happening at first, but it took about 2 seconds for me to realize my entire bed was shaking back and forth, and not in the good way.  Indeed I was alone, but due to the unusual chaos wished I had someone there to share the experience.  Since I didn’t, I said the following profound words out loud to myself in full-on excitement and fear: “OMG it’s an earthquake!”  I ran out of my bedroom, then wondered where I was going and why, and then returned to my bed for lack of a better plan.  Then, just like that, it was over.  *Note to self:  next time remember to at least go to a doorjamb and do not sit on your bed directly under a ceiling fan that could crash down onto your face.  Anyway, this experience greatly increased my fascination with earthquakes and also caused me to develop a loose plan for the potential “Big One” that has always been a possibility in my region.  By “loose”, I mean that I will round up whatever water, food, and valuables and ride my bike over to the house of a close friend about 5 miles away.  If I don’t arrive, she knows to come looking for me.  Hey, it’s something.
I will now finally get to the point of my story.  I am obsessed enough with earthquakes and have just enough dork in me that I regularly check the U.S. Geological Survey's Latest Earthquakes In the World List.  Seriously, I check this thing daily.  In doing so, I’ve actually learned some things and have noticed some interesting trends.  Such as the significant increase in quakes in .  You might remember me bringing this up in a previous post about the sudden rash of mass animal deaths occurring all over the place.  The first of those fish/bird deaths were in December in towns surrounding Guy, Arkansas, where they experienced over 500 earthquakes in the last 4 months of 2010.   also happens to be the location of significant heavy drilling, more specifically, hydraulic fracturing.  There is a lot of speculation out there that this type of drilling is environmentally hazardous and can cause quakes, and that the Bush administration influenced the 2004 EPA study that concluded it was safe (hence, a broader study is being done and results should come in 2012).
According to the USGS, there have been 60+ quakes in in the last 16 days.  Apparently these are called “swarms” and occurred in the same region in the early 80’s and in 2001.  Earthquake experts say they don’t know why they start, stop, or how to predict how long they will last.  I would be interested to know if there is a correlation between the amount of drilling going on and these “swarms”.  Most articles I've read about these recent quakes do not mention it, but I’m convinced it’s related.  I’m also convinced that the government has something to do with why hydraulic fracturing is not being mentioned as a potential contributor or cause.  It seems only logical to at least consider it and rule it out, yet nothing.  Are they trying to hide something?  I would guess yes.  Especially if something they have deemed “safe” is indeed causing it.  Fortunately, most of these quakes are on the smaller side and not causing significant damage (although they did have a 4.7 late last night - their largest in 35 years), but clearly something is awry.  The most traditionally active faults in  have not had the volume of quakes that has had the past several months.  I just don’t buy that this is a natural occurrence.  Run for your lives, people of .
Posted by KickinAssTakingNames at 8:17 PM 2 comments: Links to this post

Well hello there, strangers.  Things have been unusually busy and somewhat stressful here at KATN the last week or so.  There have been some highs (promotion at work), some lows (the loss of a dear relative), and some stuff in between that were both good and bad simultaneously (putting the kibosh on dating the motorcycle-riding metalhead guy, attending an annual gathering to celebrate a friend who died suddenly a few years ago).  It’s just been a weird stretch of days around here with a wide range of feelings happening all at once.  Add a big, fat, full moon to all that and the result is me acting frazzled, irritable, and occasionally demonstrating road rage.  Poo-poo the full moon theory all you want, but I’m a believer.
There have also been some strange things happening.  Such as receiving what I think is my 4th or 5th AARP card and info in the mail.  What in the goddamn hell?  At first I thought it was some sort of fluke.  Now I’m starting to feel a bit offended, not to mention panicked because I’m being constantly reminded of my lack of retirement preparedness.
Even the weather has been weird. After a bad ice/sleet/snow storm a few weeks ago followed by a long stint of brutal cold, the temps suddenly soared freakishly high into the low 70’s this week long enough to melt that shit.  I love winter, but I don’t love feeling like I’m living on a giant skating rink of an earth without skates.  Finally I can walk to and fro without looking like a fragile old lady afraid of breaking a hip.  That being said, ice storms do make for some cool pics, even if it takes ultra-tiny baby steps, looking a fool, and 30 minutes to walk 50 yards to snap them.  Here are a few that I will now bore you with: 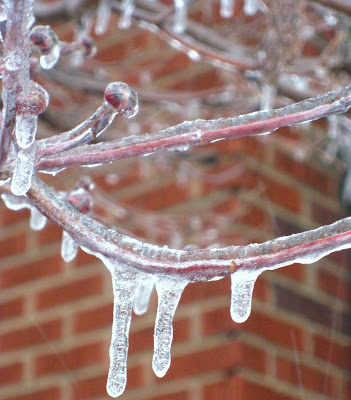 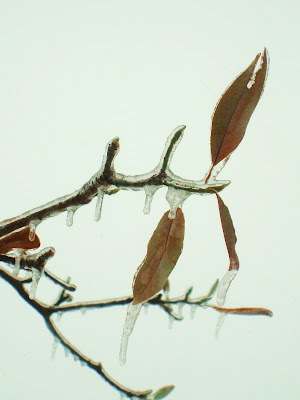 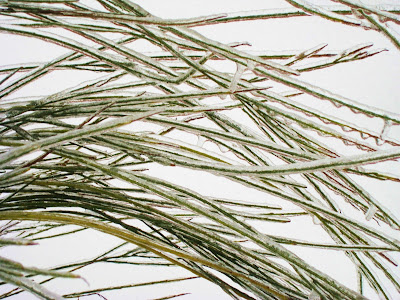 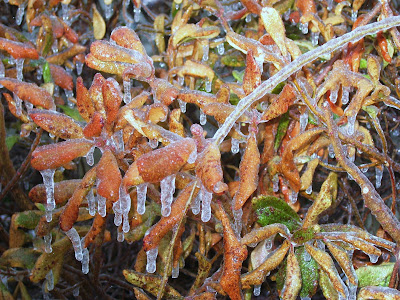 Unfortunately, the ups and downs look to continue into next week, but as long as there are some ups (read: Motörhead) I think I can handle it and keep my bitching/stress level to a minimum.  Although, next week involves me driving 6 hours to a funeral so we'll see how that pans out.
Posted by KickinAssTakingNames at 8:10 PM 5 comments: Links to this post

Email ThisBlogThis!Share to TwitterShare to FacebookShare to Pinterest
Labels: Stuff

I recently saw Buckcherry live for the first time.  Although I like every song I’ve ever heard by them, I never fell in love quite enough to become a loyal follower.  I love their style, but at the same time it’s been done before and by some of the greatest, so there was no special “spark” for me.  I always had this feeling that they’d be a good live show, though.  I’ve had opportunities to see them before and passed them up, so this time when my pal scored free tickets plus passes to the Jägermeister VIP area, I figured it was destiny.  I must say, Buckcherry did not disappoint one bit. In fact, they were even better than I expected.  They sounded great, and their oddly attractive, skinny, heavily tattooed singer knows how to move up there on that stage.  I say “oddly” because I typically prefer a man with a bit more meat on his bones.  The heroin look doesn’t usually do it for me.  As a surprise bonus, our VIP passes came with some drink tickets, which we promptly used for 2 shots of Jägermeister, and later on, for 2 other shots that involved Jäger mixed with root beer.  The root beer really took over, so that one was delicious, whereas the earlier shot made me want to tear my tongue out and curl up in the fetal position.  I scaled back the beers, so although I had a nice buzz going at a point, it was not a drunken evening.  However, my headache the next morning would suggest otherwise.  I realize now, just how close to poison Jägermeister must be.  The entire night I had 3 watery American beers and those 2 shots, so I know the Jägermeister is to blame.  Well, isn’t it always?  Those shots weren’t even all that big and one was diluted, so my point here is that if those shots can produce that kind of headache, then something very, very wrong is going in inside that bottle.  Here’s some classic Buckcherry for ya.


I should add that Hellyeah was the final opening act.  Again, another band that I’ve enjoyed to some extent but never “wowed” me into wanting more.  They put on a damn good show too.  The place was sold out, and Hellyeah seemed to have just as many fans there as Buckcherry.  Good for them.  Here’s some Hellyeah for your Sunday listening pleasure.


Seeing as I’m on a video-posting roll, I will share with you the brand new trailer for the Fishbone documentary that’s coming out soon.  I happen to be on Fishbone’s email list, and I had no clue that such a thing was even in the works until I got an email about it this week.  Documentary?  Fishbone?  Why those just happen to be two of my favorite things.  Don’t believe the hype, people.  Ska is not dead.


Now for the most exciting news.  Motörhead is in my very near future.  Hellyeah!
Unrelated to music but an important side note:  GO PACKERS.  I want to see the Steelers, and more specifically that rapist jerk Roethlisberger, get their asses handed to them.
Posted by KickinAssTakingNames at 11:21 AM No comments: Links to this post

Lastly, I made homemade chicken noodle soup on Sunday.  There’s nothing to ponder here at all, but it turned out so awesome I thought I’d share.  I'm rather proud of it.  I think it could win a contest. 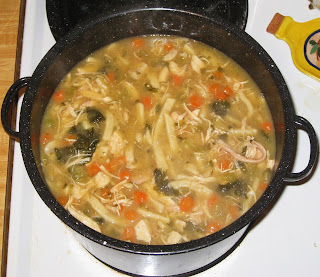 Posted by KickinAssTakingNames at 11:32 AM 2 comments: Links to this post