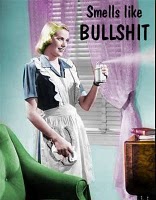 A study conducted by the University of Maryland judged how likely consumers of various news outlets and publications were to believe misinformation about a wide range of political issues.  Overall, consumers of nearly every news outlet believed they had received some false information, and 90% of participants felt they were given false information specifically during the 2010 election campaign.  The latter is a very sad fact, albeit no shocker.  The best part is that the study found viewers of Fox News in particular to be "significantly more likely" than those who never watched it to believe the following:

That last one is the kicker.  Notice it is tied for the highest number of points.  WTF, people?  The study also showed a correlation between increased Fox viewership and increased belief in this false information.  So, basically they are saying that Fox is brainwashing people with their spewed lies.

Since this study was released, Fox news has responded to this claim.  Michael Clemente, Fox News senior vice president for news, maturely countered the study's findings by stomping his feet and yelling "U of M sucks!".  More specifically, he said, "The latest Princeton Review ranked the University of Maryland among the top schools for having ‘Students Who Study The Least’ and being the ‘Best Party School’ – given these fine academic distinctions, we’ll regard the study with the same level of veracity it was ‘researched’ with."   Not only was that the best argument this guy could come up with, but the reporter who took the quote responded with, "For the record, the Princeton Review says the University of Maryland ranks among the 'Best Northeastern Colleges'. It was No. 19 on the Review’s list of 'Best Party Schools.'" Try again, Clemente.
Posted by KickinAssTakingNames at 9:58 AM