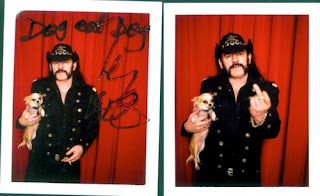 A documentary about Lemmy has been in the works forever, and it finally premiered this past spring at the SXSW music festival.  Since then I've been waiting and waiting, wondering when the hell the rest of us are going to have a chance to see it.  The movie has continued to make the rounds at various film and music festivals since then, but still no national release.  Until now.  The word on the street is that the film will hit theaters in select major U.S. markets in mid-January, to be followed up by the DVD release on February 15th.  The DVD will include 2 discs and 4 hours of bonus coverage.  That sounds superb.

Unfortunately I'm not quite sure if my town will be included in the "major U.S. market" category, but I waited this long so an extra month won't kill me at this point.  Lemmy is most definitely a legend, but he's quite an interesting character to boot, and I'm assuming this documentary will not disappoint in the slightest.  I once had a brush with Lemmy's rock 'n' roll greatness when I was at the Best Bar in the Entire World- the Rainbow Bar and Grill in Hollywood.  I have long been well aware that Lemmy frequents the Rainbow and lives right down the street.  When I visit L.A., which I do 1-2 times a year, I ALWAYS go to the Rainbow at least once.  I love this place for a multitude of reasons, but amongst other things, it is the best people watching you will ever find.  Anyway, a few years ago I paid my annual visit to the bar and while having a smoke out on the patio I see that dork from Sum 41 that was married to Avril Lavigne.  I said to my friends, "There's Deryck Whibley!", and in unison they all replied, "Who?".  Which was totally classic.  After that non-excitement died down and he walked into the bar, I turned my head back towards the entrance and see LEMMY pull up in a very shiny big-ass truck.  He got out with his cowboy hat, handed the keys to a valet and strutted into the bar, walking so close to me I could've touched his mole (except it was on the other side of his face, which would've made it more difficult).  Long story short, I was star-struck.  I don't get star struck to the point of fear and anxiety except for a rare few people, none of which I've ever actually seen in person besides Lemmy, but I can only assume how idiotic I'd act.  So, in one of my biggest regrets ever, I  freaked out because Lemmy was in my presence, clammed up, got all nervous, scared, and didn't even come close to approaching him, much less ask to get a picture.  I still kick myself for that one.  Why be nervous?  But I was.  I couldn't help it.  Every trip to L.A. is now a mission to recreate that scenario with an outcome that includes sitting at the bar and having a whiskey with Lemmy along with photo proof, as opposed to me cursing myself for the next 3 years.

Here's the trailer for the movie.

Posted by KickinAssTakingNames at 6:33 PM

Email ThisBlogThis!Share to TwitterShare to FacebookShare to Pinterest
Labels: Music