Music snobs.  They really grind my gears.  There are various forms of music snobbery, but I’m focusing on those who turn their nose up or get a condescending tone when someone likes a certain artist or band that they deem crappy.  Hey, we all have our differences, and there is freedom of choice here in the , no?  I will attest that there is music out there that I can’t and won’t listen to, whether it’s because I'm afraid my ears will bleed, or because I might hurt someone or myself if exposed.  But you know what?  I don’t give a rat’s ass if someone else likes it because it doesn’t impact me and because it’s absurd to judge or belittle someone because of it.  Proof:  I recently dated a guy who loves and plays the banjo, and I absolutely fucking hate any music with banjos.  Granted, we have since broken up, but it had nothing to do with the banjo exposure, which I survived and with a smile on my face (he was a big music snob, however, which should've been the first red flag).  But I digress.  The #1 response by music snobs that really makes my blood boil is when someone says "Holy fuck, how do you like that shit?  They have no talent".  Newsflash #1:  apparently the music business isn’t solely about formal training and talent, because there are plenty of artists out there who have very little of either.  Newsflash #2:  just because a band has significant musical talent does not mean I will enjoy listening to them (sorry, Rush).  Newsflash #3:  my self-esteem is in tact enough that such words are not going to damage me, and will only result in me surmising that you are a douchebag who must cut others down in order to feel better about yourself.  I know a decent amount about music and I know a talented musician or songwriter when I hear one.  Sometimes that is the draw, however, music doesn’t always have to be about that.  Sometimes it’s simply about a catchy beat, a strong baseline, meaningful lyrics, or perhaps good memories that a song brings forth.  So yeah, no need to inform me that the Bangles were bubblegum pop no-talent ass clowns, because it won't change the fact that I love their version of "Hazy Shade of Winter" when I hear it.  So fuck off.
Birds.  If there are gale-force winds, does it make it harder for a bird to fly?  Can a tiny bird fare as well as a big one, or would a larger wing span be a disadvantage in this situation because there's a greater area for the wind to catch?  Are some birds just bad at flying in general, just as some people suck at driving?  If so, do other birds flip them the bird when they are flying erratically and cutting them off?  Where does the phrase "flip the bird" come from, anyway?  Regardless, in case you haven't heard, the bird is the word.
Tila Tequila.  All I know about her antics is what I read on online gossip rags, but that is way more than enough to A) conclude she is not the sharpest tool in the shed, B) wish she would go far, far away, and C) state on the record that she has Borderline Personality Disorder.  Mark my words.  You heard it here first, people.
I won't bore you fine readers with my foolish musings any further today.  Now go have an excellent weekend.  That is an order.
Posted by KickinAssTakingNames at 5:10 PM No comments: Links to this post


Lucky number 19.  Californians are set to vote on Proposition 19 next week, which would further decriminalize marijuana.  If this passes, it could generate around $1.4 billion in tax revenue for the state with the largest budget defecit in the U.S.  In addition, it would create jobs, free up law enforcement for more serious and violent crimes, treat a variety of medical symptoms and conditions, and would also probably free up some jail space so that there is room for Lindsay Lohan and Paris Hilton next time around.  It's a win-win for all, folks.  Magical, I say.  If you live in Cali, I beg you to please vote responsibly.

I'm excited about the increased movement in the last several years to decriminalize marijuana around the U.S.  It's about time.  I remember a day when I didn't think I'd ever see it happen.  When I was in high school, which was in the 80's, my english teacher assigned us to write a research paper on a "debatable topic".  Probably 80% of the class wrote about abortion, but I chose to write about the decriminalization of marijuana.  Looking back on that choice, I'm shocked by my own ballsy decision.  Let's face it, by writing on that topic I was pretty much outing myself as a pothead.  As I've mentioned previously, I like to stay out of trouble and generally try to maintain a good (even if somewhat false) impression amongst those who have any sort of power over me (in this case, the teacher, and potentially my parents).  Hence, I'm proud of myself for ignoring that and going with it.  Not only that, but I actually became a member of NORML in order to research that paper.  Back in those days, there was no internet and they actually had to send me a big package of stuff in the mail.  Ah, the old days.  Anyway, to make a long story short, the teacher gave me a score of OVER 100% on my paper, stating that I proved my point so well that she gave me extra credit.  Not only did I feel great about this, but I also realized that my english teacher that year was most likely also a big pothead.  Double score.  I still have that paper.

I hope I shall live to see the day that marijuana is legalized across the U.S.  The many benefits far outweigh any potential negatives (most of which are surmised by uptight haters with agendas and not scientifically proven).  People, there is a reason that the 1960's were all about peace and love and in my opinion it's because of the kind bud.  Plain and simple.  To quote Carl Sagan:  "The illegality of cannabis is outrageous, an impediment to full utilization of a drug which helps produce the serenity and insight, sensitivity and fellowship so desperately needed in this increasingly mad and dangerous world."  Well said, Dr. Sagan, well said.
Posted by KickinAssTakingNames at 8:04 PM No comments: Links to this post

It’s Hard Out There for a Pimp. 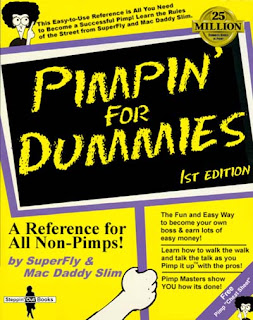 First off, KATN would like to send a big shout out to both the universe and the Texas Rangers for granting my wish and forcing a world series that will not include the fucking Yankees.  That more than makes up for the fact that those ass licking Giants won the NLCS.  It’s ironic that I will be rooting for the Rangers to win the series, as I vehemently abhor all things We will probably have to endure camera shots of George W. in the crowd at the home games, but I can suck it up and deal seeing as he no longer co-owns the team and will gain nothing from a potential series victory.
Now that we have that out of the way, here’s what’s on my brain at the moment….
Pimpin’.  I found out this weekend that a guy I know has become a pimp.  I guess you could call him a friend, but I would use that term very loosely here.  I have known him for several years now, but we aren’t close.  Our relationship basically consists of going out and partying once every couple of months with mutual friends.  There has always been an element of shadiness to this guy, but he has never been anything but nice and respectful towards me so I am friendly with him but keep a healthy distance.  I guess what I’m trying to do here is avoid judgment by you fine readers, because I’m new here and I don’t want you to think I typically befriend or hang out with people engaged in extremely questionable and illegal activities such as pimping.  I am not thrilled that this is the case, and I didn’t ask him any questions.  Yet.  He didn’t quite brag about his new pimpdom, but his few acknowledgments were proud ones that minimized the inappropriateness and I didn’t want to feed his ego or his pursuit.  Deep down, though, I’m dying to get more detail, but that will all come in due time.  All I know is that he’s involved in exploiting and bartering women’s bodies for money, which of course I am completely against and quite offended by.  Pimp’s defense is that he’s only working with “friends” he’s known for a long time and cares for, and that they would be “whoring” themselves anyway.  Perhaps, but it’s still morally wrong, illegal, and highly risky for a pimp novice.  Not to mention that if these women are willing participants, I’d much rather help them get some therapy (and probably rehab) to move beyond it, rather than simply accept it.  No woman wants to prostitute themselves.  NONE, I SAY.  Anyway, here at KATN we like to play it safe in life.  I don’t like to get in trouble, so I tend to follow the rules and break only minor laws.  Hence, Pimp’s new venture is rather fascinating to me.  What makes one want to become a pimp?  Is this a lifelong goal or an accident?  Does he have any guilt or remorse at all?  Is he worried about getting caught or knocked off by some other pimp that thinks he stole his “womens”?  I want to understand.
Looks can be deceiving.  Have you ever noticed that the people who many might consider to be somewhat intimidating looking are nearly always much warmer, friendlier, and more polite than most?  I was at a bar this weekend that tends to attract a punk/alternative kind of crowd.  Lots of black, piercings, tattoos, etc.  There are a few other places that I frequent that also tend to attract a similar dark-looking crowd.  The people who hang out and work at these joints are the complete opposite of what one might expect based on their looks.  Whoever happens to be near the door usually welcomes you when you walk in, even though they don’t know you.  They actually say “excuse me” where appropriate (a rarity today, and it grinds my gears).  They don’t gawk or chuckle at the preppy, straight-laced looking metrosexual that happens to walk in, as would likely happen to them if they show up with a mohawk or ear gauges at a foofy wine bar in the burbs.  Have you ever been to a Harley rally?  I have.  Nicest, most welcoming people you could ever meet.  Some of the kindest, most harmless people in my life look like complete badasses.  Just an observation.  I suppose the obvious assessment on this is that, because these people go against the norm, they are used to stares, looks and comments that imply they are less than, therefore, they are much more open-minded and accepting of everyone’s differences and don’t judge as they have been themselves.  They kill people with kindness and politeness.  Pure awesomeness.
Posted by KickinAssTakingNames at 10:43 AM 1 comment: Links to this post

Let's Get This Party Started. 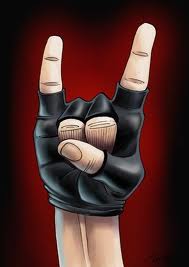